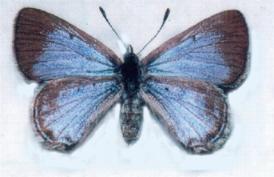 The Geelong Field Naturalists Club has chosen as its emblem the Small Ant Blue butterfly Acrodipsas myrmecophila (syn Psuedodipsas myrmecophila). This beautiful little butterfly was once known from just one site near Geelong; the Ocean Grove Nature Reserve. Now, sadly, it is probably extinct in the Geelong region. However, it remains reasonably common in other areas from central Queensland, coastal New South Wales, and central Victoria, around Mt. Piper.

At the Ocean Grove Nature Reserve, the butterfly laid its eggs, in clumps of up to fifty, on the dead stumps of Golden Wattle, Acacia pycnantha. Only those stumps which housed colonies of a small black ant Iridiomyrmex nitidus were used. The ants, commonly called Coconut ants because of their strong characteristic coconut smell, tended the eggs until they hatched some four weeks later. The quick moving larvae were found inside the ants' nest. Little is known about the feeding behaviour of the larvae, but it has been suggested that they are predacious on the pupae of the ants. Captive larvae have also been known to feed on sliced apple and a honey/water mixture.

The butterfly pupae are attached in groups to the walls of the ants' galleries, or in cracks in dead tree stumps. Ants have been observed walking over freshly emerged adults, without interfering with them in any way.

Adult butterflies engage in 'tree-topping' before mating. Coconut ants are very common at Inverleigh Common and Bannockburn Bush, although the Small Ant Blue Butterfly has not been recorded from these sites. In an effort to determine whether the butterfly could be found there, the (currently inactive) GFNC Biodiversity Group placed two nesting stumps in the bush at Inverleigh. These were made from old railway sleepers, split lengthwise, with tunnels and chambers gouged into the internal surfaces. They were clipped together and could be easily opened without destroying the nest or its inhabitants. Both were colonised by the coconut ants, but no signs of butterfly larvae were seen.

Reference: Common and Waterhouse Butterflies of Australia, Angus and Robertson, 1981.